Dr. Karen Ragoonaden was honoured with a blanket wrapping ceremony, facilitated by Jordan Coble, Westbank First Nations (WFN) Councilor, in recognition of her efforts to support Indigenous teacher education and the Indigenization of post-secondary education as well as strengthen ties between WFN and the Okanagan School of Education.

“This ceremony was held in recognition of Karen and her commitment to bettering our community ties through education, specifically her commitment to interconnecting indigenous education in meaningful and transformative ways,” says Jordan Coble, WFN Councilor, “The program introduces localized indigenous teachings early and throughout the journey and this is largely due to Karen’s excitement for working with all involved. The ceremony itself is a binding agreement between our community and those in attendance to continue her legacy through education with respect, energy and inclusiveness.” 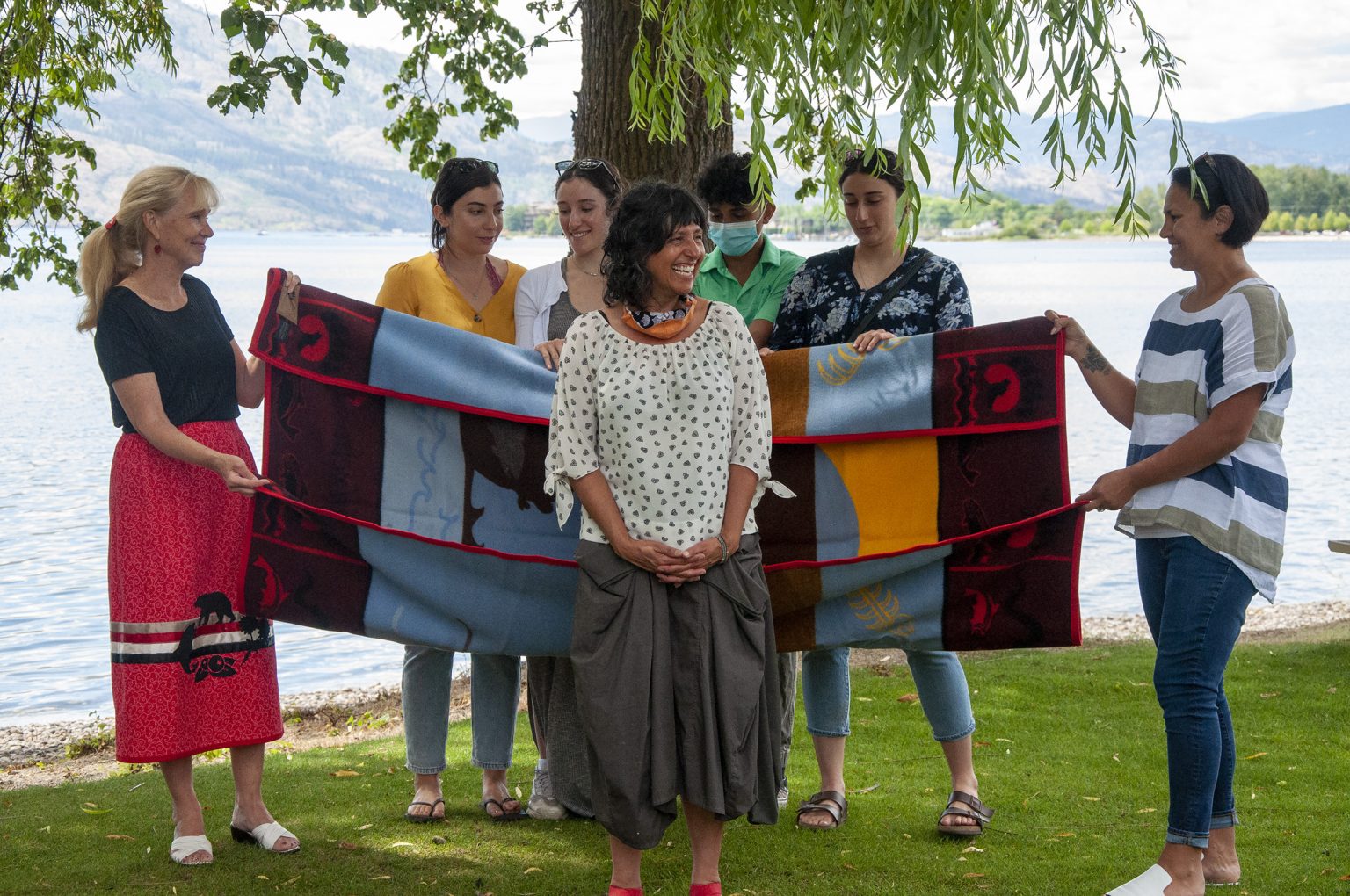 Dr. Karen Ragoonaden, with her daughters and nephew behind her, Terry-Lee Beaudry (left) and Rachel Marchand (right).

The ceremony was held in late June on Westbank First Nation beach with a small group of Dr. Ragoonaden ‘s colleagues and family. The event was filled with emotional speeches as it provided an opportunity to reflect on Dr. Ragoonaden ‘s accomplishments and impact during her time in the Okanagan. On July 1, she transitioned to the role of Dean for the Faculty of Education, University of Manitoba.

“I am so very humbled by this recognition, especially now, as the truth in the TRC Calls to Action have become so very significant,” says Dr. Karen Ragoonaden. “I continue to listen, to learn and to unlearn.  Thank you to Jordan Coble, Terry Beaudry and Bill Cohen.”

The blanket presented to Dr. Ragoonaden portrays a coyote howling at the sky, a grizzly fishing and incorporates pictographs of an eagle and a kokanee skeleton symbolizing the cycle of life and death. In each corner of the blanket is a WFN logo, which features a grizzly pawprint with a coyote silhouette in the middle and a serpent in the waves underneath, representing n’haitik (Ogopogo).

Special thanks to Jordan Coble, Terry-Lee Beaudry, Bill Cohen and members of the Indigenous Education Council for organizing this event.

Posted in Featured Stories, Our Faculty, School of Education, Spotlight | Leave a response