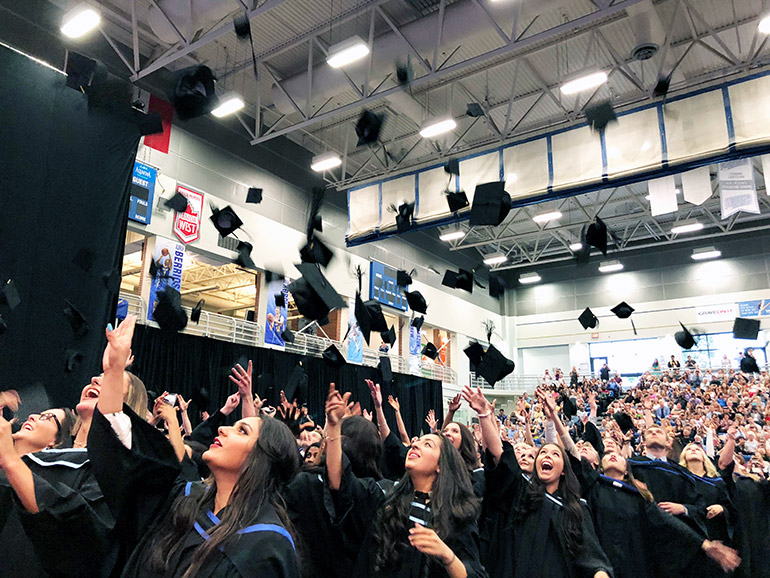 New graduates celebrate their success after their convocation ceremony at UBCO last June.

It’s the culmination of years of hard work, and the realization of hundreds of dreams.

This week UBC Okanagan celebrates its students as it hosts six separate graduation ceremonies over two days. More than 1,725 students will cross the stage, earning their undergraduate degrees while 215 students will receive their master's degree and 40 their doctorates.

“This year’s UBC Okanagan graduating class goes out into a world where sweeping changes are happening,” says Deborah Buszard, Deputy Vice-Chancellor and Principal. “From geopolitics and the environment to the nature of work itself, rapid and radical change is all around us. As UBC graduates, we know our students have the intellectual tools to thrive in the face of change.”

The formal procedures begin Thursday morning with students in the Irving K. Barber School of Arts And Sciences crossing the stage in three different convocation ceremonies. Students in the Faculty of Creative and Critical Studies will also cross the stage that day.

On Friday, celebrations kick-off early as Faculty of Health and Social Development students celebrate their achievements starting at 8:30 a.m. School of Education, Faculty of Management and School of Engineering students will be conferred their degrees in two following ceremonies.

“Congratulations to the class of 2019 for all they have accomplished,” Buszard adds. “I have every confidence their education and experiences at UBC Okanagan have positioned them for the brightest future.”

While student accomplishment is the heart of convocation, innovation, excellence and making a difference in this world are themes to be recognized. UBCO will present three honorary degrees this week.

Lewis Kay will receive a Doctor of Science at the 11 a.m. ceremony on June 6. Kay is a biophysicist known for his research in biochemistry and nuclear magnetic resonance spectroscopy. He is a professor of molecular genetics, biochemistry and chemistry at the University of Toronto and a senior scientist in the molecular medicine research program at Toronto’s Hospital for Sick Children.

Friday morning, Olympic gold medalist Beckie Scott will be presented with a Doctor of Laws at the 8:30 a.m. ceremony. Scott was an 11-year member of Canada’s national cross-country ski team, retiring in 2006 as Canada’s most decorated cross-country skiing athlete. The three-time Olympian is widely recognized for advocacy for drug-free sport. She currently serves as chair of the World Anti-Doping Agency Athlete Committee.

The heads of class (top academic student) for this year include:

UBC’s Okanagan campus is an innovative hub for research and learning in the heart of British Columbia’s stunning Okanagan Valley. Ranked among the top 20 public universities in the world, UBC is home to bold thinking and discoveries that make a difference. Established in 2005, the Okanagan campus combines a globally recognized UBC education with a tight-knit and entrepreneurial community that welcomes students and faculty from around the world.

To find out more, visit: ok.ubc.ca.